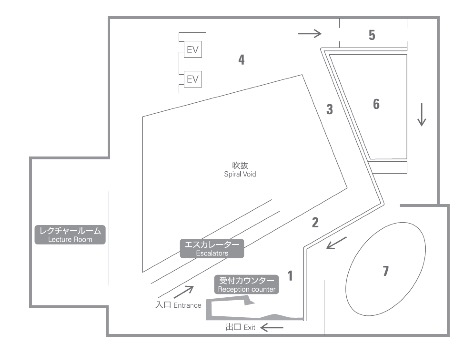 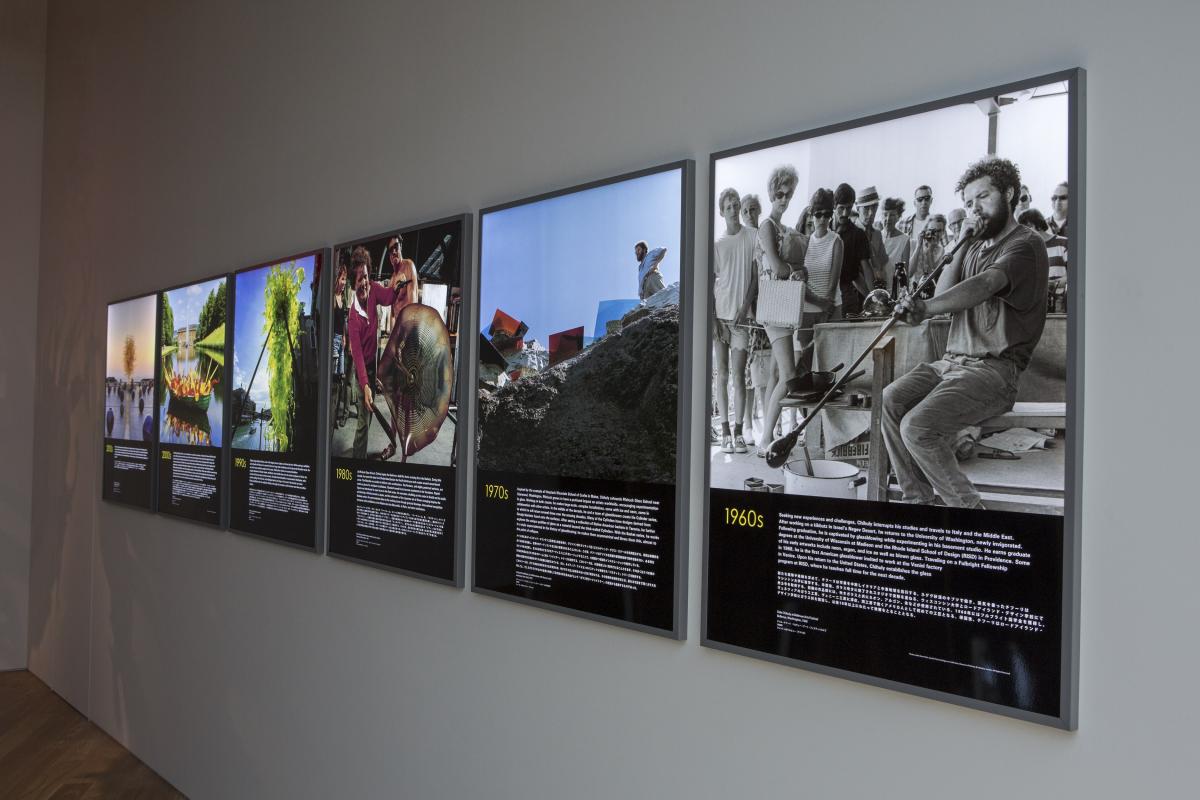 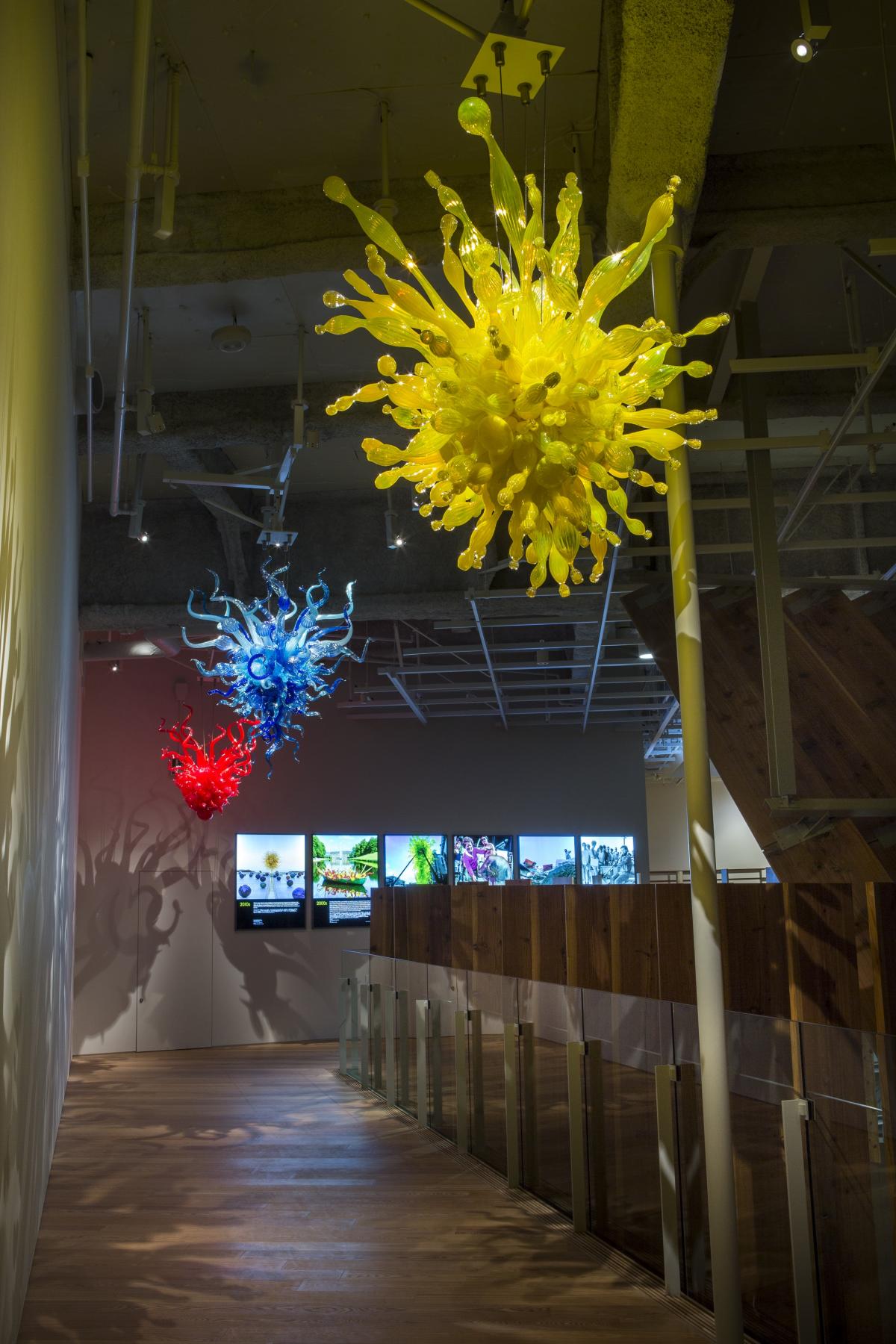 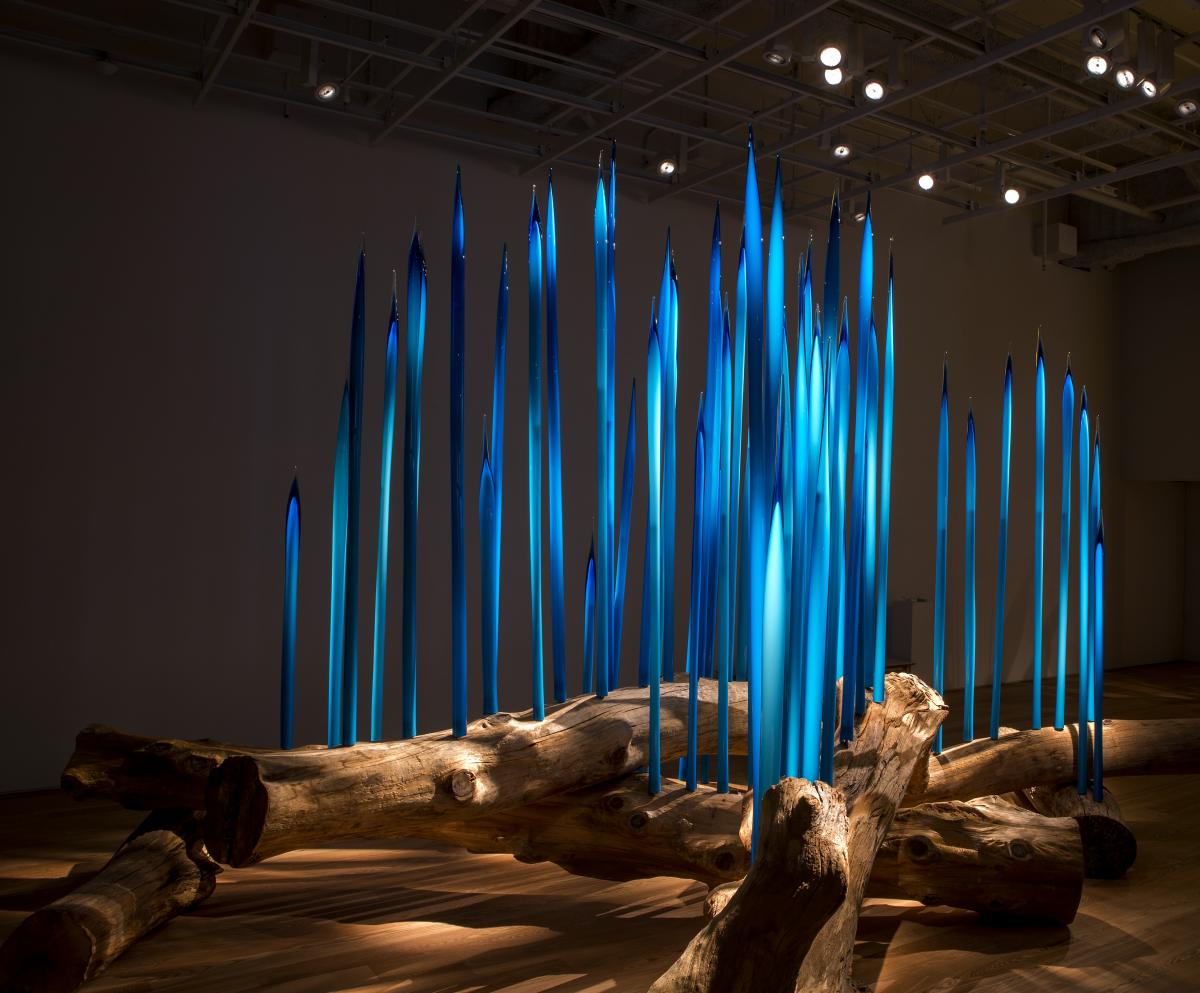 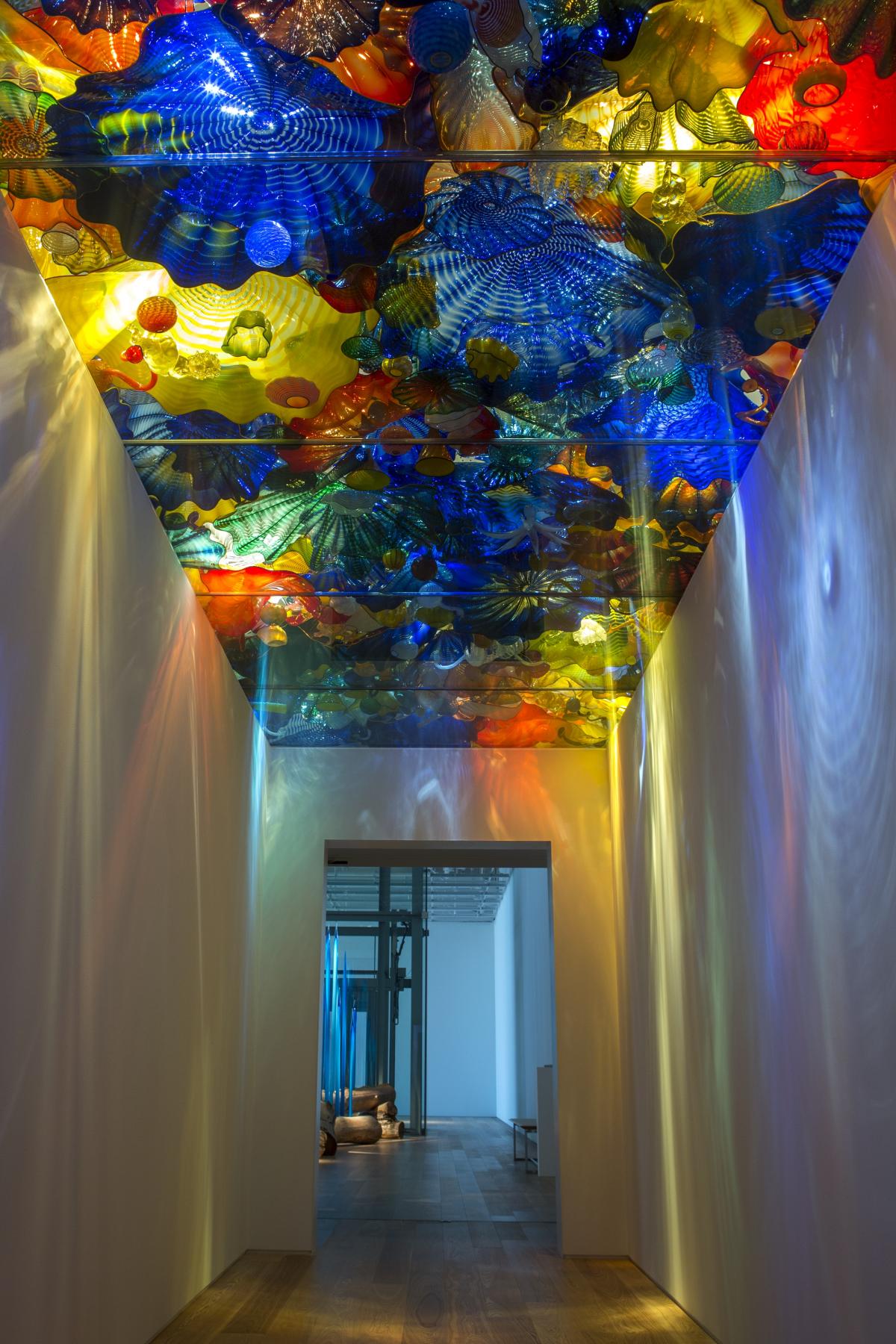 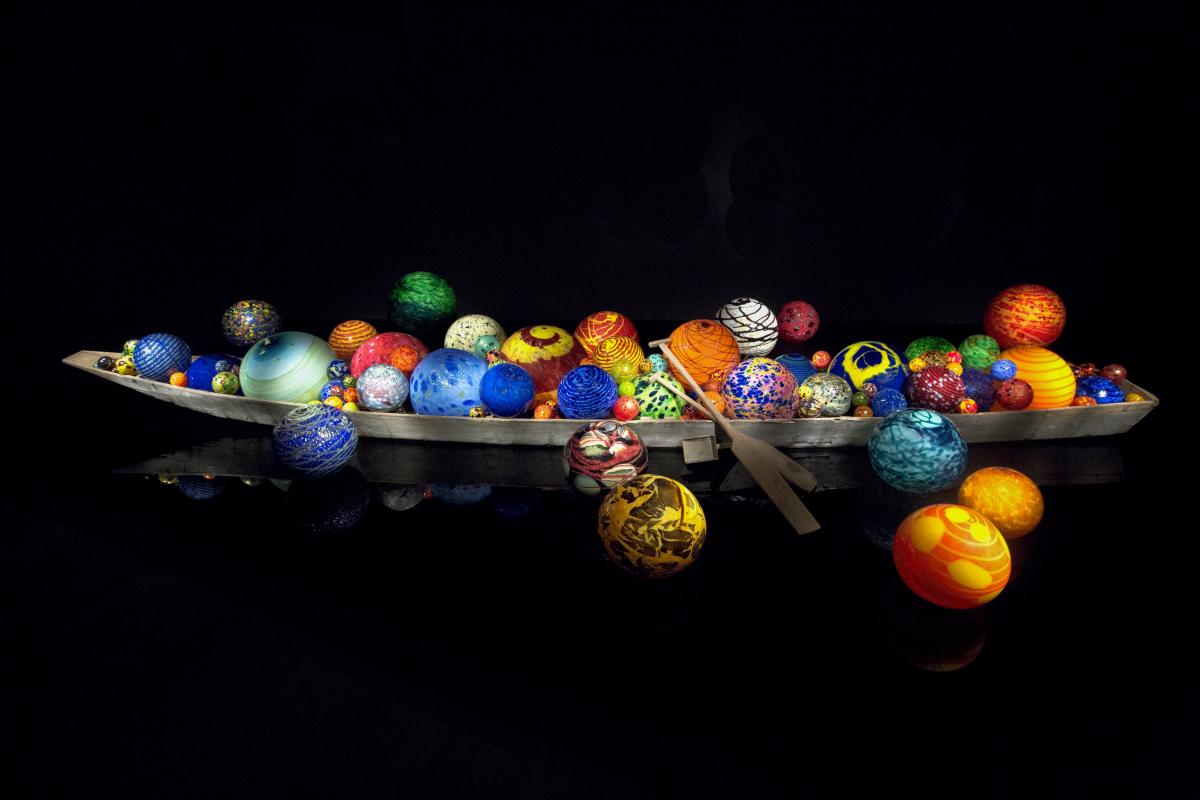 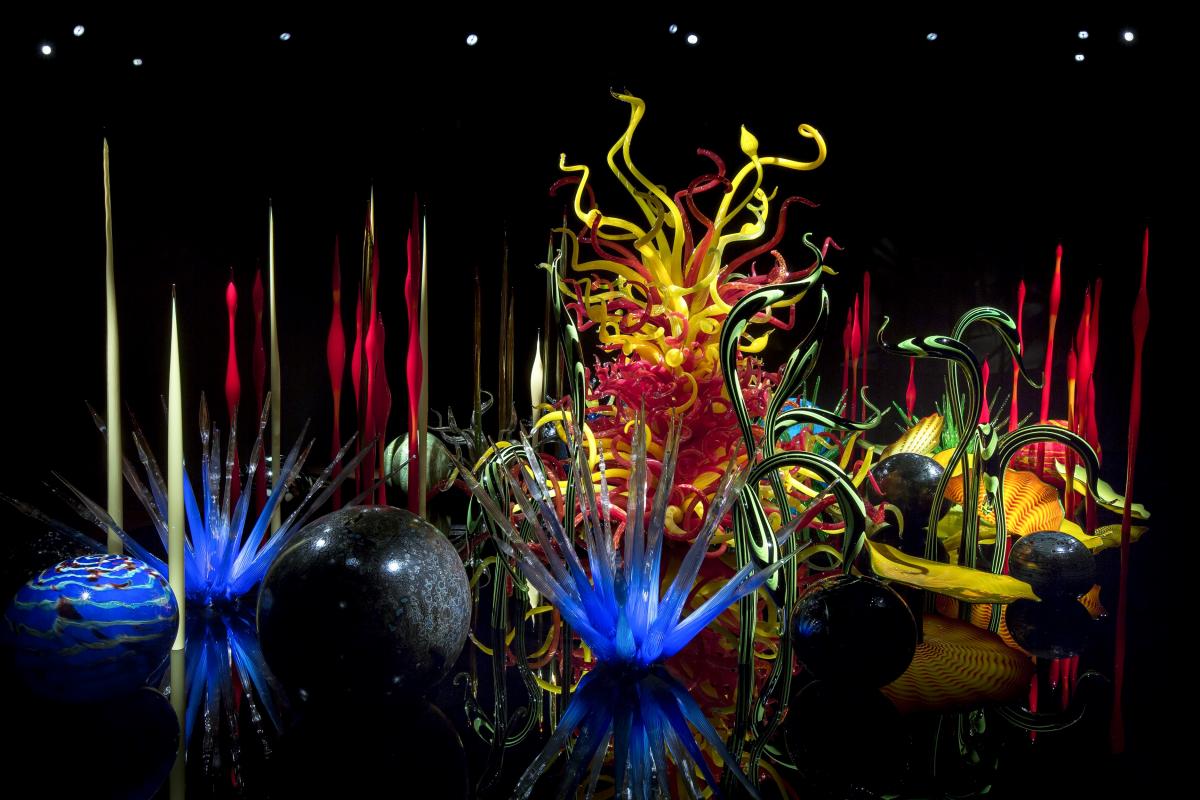 Born in 1941 in Tacoma, Washington, Dale Chihuly was introduced to glass while studying interior design at the University of Washington. After graduating in 1965, Chihuly enrolled in the first glass program in the country, at the University of Wisconsin. He continued his studies at the Rhode Island School of Design (RISD), where he later established the glass program and taught for more than a decade.

In 1968, after receiving a Fulbright Fellowship, he went to work at the Venini glass factory in Venice. There he observed the team approach to blowing glass, which is critical to the way he works today. In 1971, Chihuly cofounded Pilchuck Glass School in Washington State. With this international glass center, Chihuly has led the avant-garde in the development of glass as a fine art.

His work is included in more than 200 museum collections worldwide. He has been the recipient of many awards, including twelve honorary doctorates and two fellowships from the National Endowment for the Arts.


Chihuly has created more than a dozen well-known series of works, among them, Cylinders and Baskets in the 1970s; Seaforms, Macchia, Venetians, and Persians in the 1980s; Niijima Floats and Chandeliers in the 1990s; and Fiori in the 2000s. He is also celebrated for large architectural installations. In 1986, he was honored with a solo exhibition, Dale Chihuly objets de verre, at the Musée des Arts Décoratifs, Palais du Louvre, in Paris. In 1995, he began Chihuly Over Venice, for which he created sculptures at glass factories in Finland, Ireland, and Mexico, then installed them over the canals and piazzas of Venice.

In 1999, Chihuly started an ambitious exhibition, Chihuly in the Light of Jerusalem; more than 1 million visitors attended the Tower of David Museum to view his installations. In 2001, the Victoria and Albert Museum in London presented the exhibition Chihuly at the V&A. Chihuly’s lifelong fascination for glasshouses has grown into a series of exhibitions within botanical settings. His Garden Cycle began in 2001 at the Garfield Park Conservatory in Chicago. Chihuly exhibited at the Royal Botanic Gardens, Kew, near London, in 2005. Other major exhibition venues include the de Young Museum in San Francisco, in 2008; the Museum of Fine Arts, Boston, in 2011; and the Montreal Museum of Fine Arts, in 2013. Chihuly Garden and Glass, a long-term exhibition, opened at Seattle Center in 2012.


The man responsible for “Glass Art Garden: The Chihuly Experience” is American artist Dale Chihuly (1941–). Chihuly initially majored in interior design and architecture at university, but after encountering glass as a material while a student he began producing artworks using glass. In the 1970s he focused on such themes as space, light, assembly, color and lines and concentrated on creating installation pieces. At the Toyama Glass Art Museum, works incorporating elements unique to Toyama are displayed, providing audiences with an opportunity to experience the artist’s activities and creative world through his artworks.

The exhibition space on the sixth floor of the museum consists of a stairwell bathed in natural light from a glass ceiling and two large gallery spaces. The first works visitors encounter are Duratoran, a portrait of Chihuly shot in Niijima (Tokyo) in 1997, and Didactic wall, a six-panel piece introducing work from each decade of Chihuly’s career to date.

Along the corridor running parallel to the stairwell is displayed Chandeliers, comprising three three-dimensional works that hang from the ceiling. Appended to the titles are the traditional Japanese color names kohiki (deep scarlet), ruri (ultramarine) and ukon (saffron yellow), named after the vivid colors represented in the individual works. Each of the works exhibits a different form, leaving a vivid impression in the minds of viewers. The shadows formed not only by the pieces themselves but also by the artificial lighting decorate the white walls of the building in a multilayered fashion, adding to the movement and rhythm the works bring to the space in which they are displayed.

In Toyama Reeds, a feature of which is the countless blue glass hand-blown glass elements that extend vertically, pieces of Japanese cedar, pine, cypress and maple sourced in Toyama are arranged three-dimensionally and support the glass tubes. With this work, the vertical visual lines are accentuated due to their concert with the lines of the louvers that are also a feature of building, and the sheer power of the rising glass overwhelms the viewer.

Toyama Persian Ceiling is displayed in such a way that it appears to be a part of the building. Within the sky-lit glass ceiling space, glass parts in the shape of starfish, octopi, shellfish and other sea creatures are scattered around “Persian” cores with distinctive herringbone patterns. Light spills onto the walls through glass parts made of multiple colors, lending the exhibition space a dream-like quality. While the shapes created out of glass and the artificial lighting evoke a sensation similar to looking at the water surface from the seafloor, the glass sculptures (Putti) reminiscent of angels positioned here and there produce a feeling akin to peering into a sublime heavenly world.

Entering the gallery, in an abrupt change from the bright space they have just passed through, visitors encounter a large exhibition space in which artworks appear to be floating inside a darkroom. The boat that forms Toyama Float Boat is called a sasabune, and was actually once used for fishing on the Jinzu River that flows through Toyama City. As well, 95 of the 117 glass Floats arrayed above the boat and above the exhibition stand were made at the Toyama Glass Studio in June 2015. Included among them are Floats made using colored glass developed in Toyama known as koshinohisui and koshinoao. The way the boat is reflected in the black acrylic base and the impression created by the colorful glass floats combine to make it appear as if the boat is actually floating on water.

In the middle of the final gallery space is displayed the large installation piece Toyama Mille Fiori (Italian meaning a thousand flowers).  Elements that visitors have encountered earlier in the exhibition including “chandeliers” (here represented as Towers), “Reeds,” “Persians” and “Floats” are arranged on an elliptical base forming a component of the work. As well, glass parts with forms reminiscent of various creatures such as Frogs’ Feet and Herons stand side by side and are amplified by the reflections in the acrylic to give the impression of a garden with a riotous profusion of flowers. Visitors are able to walk around the work, which is illuminated to enhance its dreamlike qualities, and in so doing they are drawn into its world, each aspect of which presents a completely different appearance.

Truly as the title suggests, this exhibition at the Toyama Glass Art Museum comprising a set of panels and five installation pieces provides an opportunity for visitors to get inside and circle the works, thereby enabling them to experience the diverse creative world of artist Dale Chihuly.