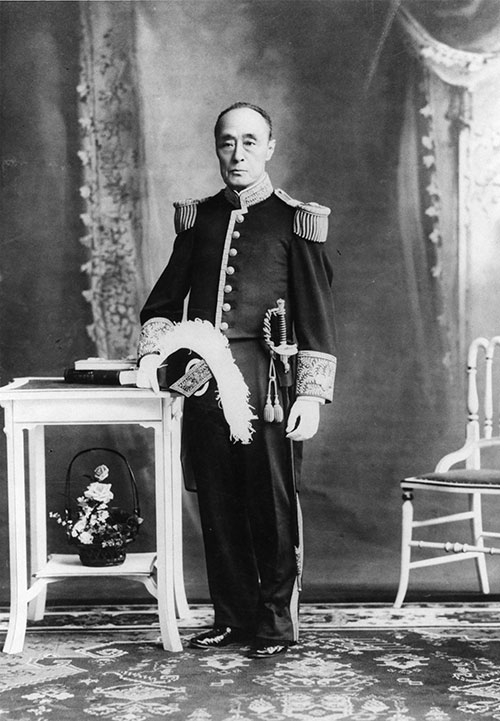 The 15th shogun of the Edo shogunate. He reigned as the shogun from January 10th to November 10th, 1867.
He was the seventh son of Nariaki Tokugawa, the ninth lord of the Mito clan. He was adopted into the House of Hitotsubashi, one of the shogunal houses, when he was nine years old at the order of the reigning shogun, making him a viable candidate to be a future shogun.

Yoshinobu Tokugawa exhibited unsurpassed political and diplomatic negotiating skills.He pushed strongly for diplomatic, military, governmental and economic reforms in cooperation with France in order to revive a declining shogunate. The activities of Yoshinobu were highly regarded as looking like a return to the first great shogun. He was praised even by those trying to overthrow the shogunate.

However, Yoshinobu Tokugawa was not able to swim against the tide of the times. He suggested on November 9th 1867 that the government return to an institution centered on the Emperor. This offer was accepted the following day, signifying the end of the shogunate’s rule over the central government. However, Yoshinobu was defeated in the war that broke out with anti-shogunate forces. He was given the death penalty, but his crimes that warranted that penalty were pardoned, and he lived the next thirty years of his life quietly in Shizuoka. In 1898, he was granted an audience with Emperor Meiji. His great achievements for the nation were recognized by the emperor in 1902 and he was bestowed with the title of duke. In 1902, he was recognized by the Emperor for his great contributions to the nation, and granted the rank of duke. As a duke, the Tokugawa Yoshinobu family was separate from the head of Tokugawa family. His oil paintings, embroidery, photographs and other works he was involved with during his turbulent life have become valuable cultural assets.