This is the room where owner of the building Akitake Tokugawa lived. The rooms for guests and family were in separate buildings in houses during the Edo Period (1603 to 1868). However, both are in the same structure in Tojo-tei House as it was built at the beginning of the Meiji Period (1868 to 1912), after the Edo Period ended. Doors made of cedar that had the function of separating spaces were used to create a clear boundary between guests and family. This sort of change in layout is not just a reflection of the downsized lifestyles of the former shogunal clan, but may also be to ensure the views of Mt. Fuji from this room. 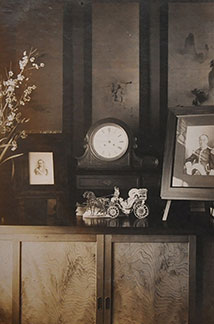 Akitake would decorate this with hanging scrolls painted by members of the famed Kano School, as well as Western objets d’art, clocks, and photos, and learn about world affairs from magazines he had imported from France. He lived a life of enlightened nobility enriched by both Japanese and Western refinement.