5. The Shirokita Bus Settlement: Adaptive Housing and the Post-war Reconstruction (1948) ~ Osaka Museum of Housing and Living ~

Six Scenes of Osaka Living.
We have reproduced in model form six representative living spaces in Osaka since Meiji period.

Living Space Theatre “From One Home to Another”
A Tale of One Family’s Movement” The story of Etsuko’s many living spaces. Born and raised in the Karahori Shopping District, she took temporary shelter in a bus village after the War, and finally moved to the Furuichi Housing Development. 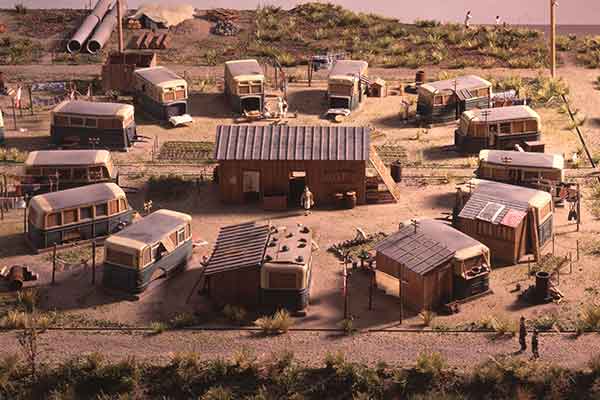 5. The Shirokita Bus Settlement: Adaptive Housing and the Post-war Reconstruction (1948)
Busses were outfitted as temporary homes in Shirokita park in response to post-war housing shortages. [Scale 1/50]

Most of central Osaka was burnt to the ground due to successive air raids in World War 2. After the war, Osaka City erected temporary housing and converted public facilities including schools, dormitories, and barracks into housing for people who had lost their homes. In one such case, charcoal powered buses was turned into houses.

In the former Toyosato-cho of Asahi-ku Ward buses were parked in an eyeglass-shaped arrangement with cooking, laundry, toilets and other amenities setup in the vacant center lot to create Osaka Municipal Shirokita Bus Settlement.

The tight interior of the bus, just 3.3㎡ or so, led most residences to extend and personalize their dwellings. Cheap rent and strong neighborhood bonds saw the Shirokita Bus Settlement survive until 1951. 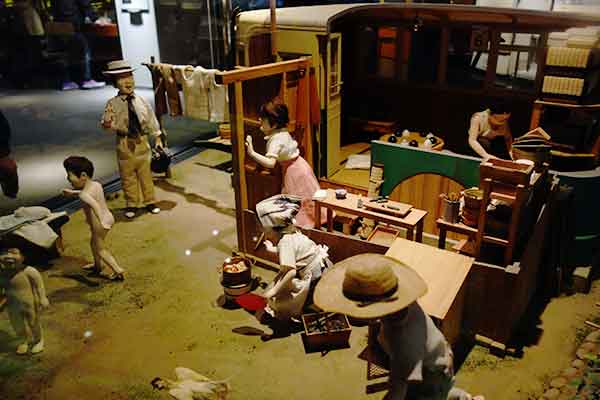