There are nine “yaya osekkai,” or “mildly meddlesome,” signs around the onsen district that offer information you don’t really need to know.

If you feel targeted by their meddling at each spot, consider yourself lucky!☆

Learn some minor things that might be surprisingly (!?) useful to know to enjoy the onsen district to the full. 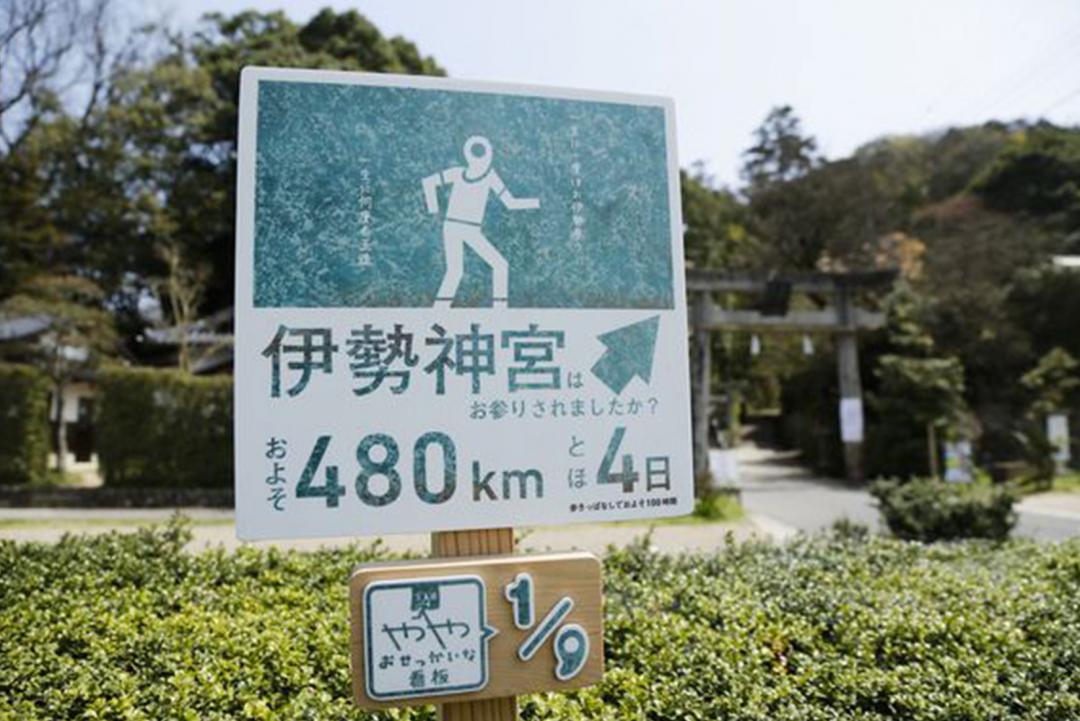 There’s 480 more km to go to Ise-jingu Shrine, which will take four days of solid walking (about 100 hours). 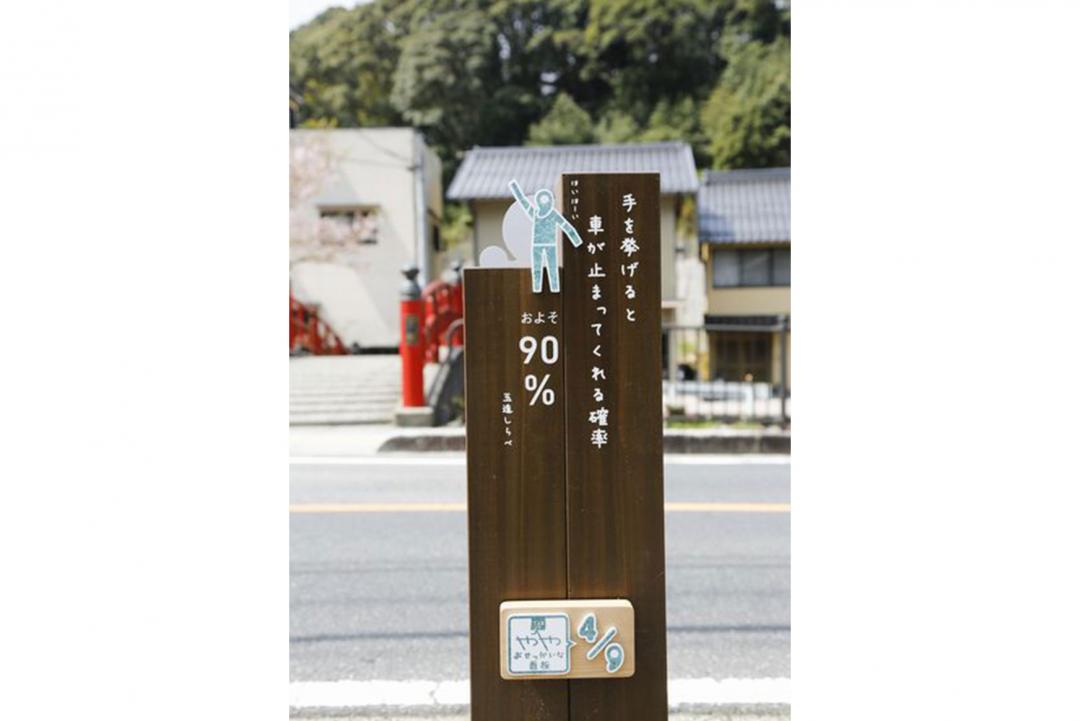 Drivers are very considerate on rural roads, so just raise your hand when you want to cross, and they’ll let you.

Even if there isn’t a pedestrian crossing. If a driver stops to let you across, call out a thank you!

A survey by the Tourism Association showed that 90% of cars stop for people raising their hands. 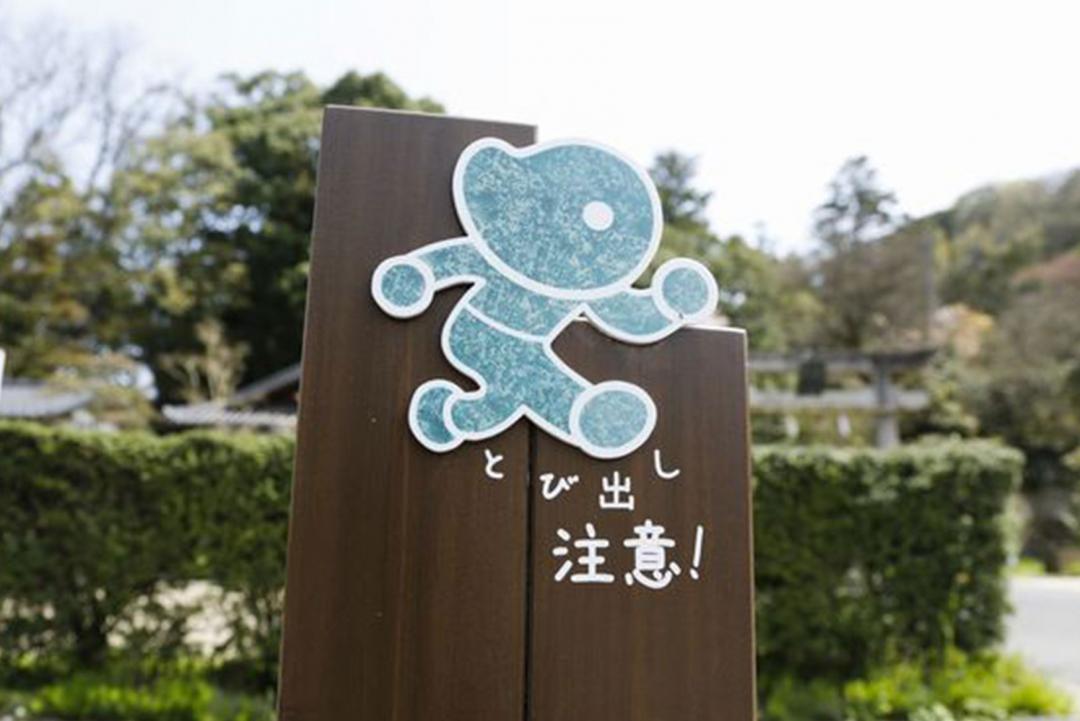 The face of the kid telling us “Running out blindly into the road is dangerous!” is a magatama! How cute!

Don’t run out into the road 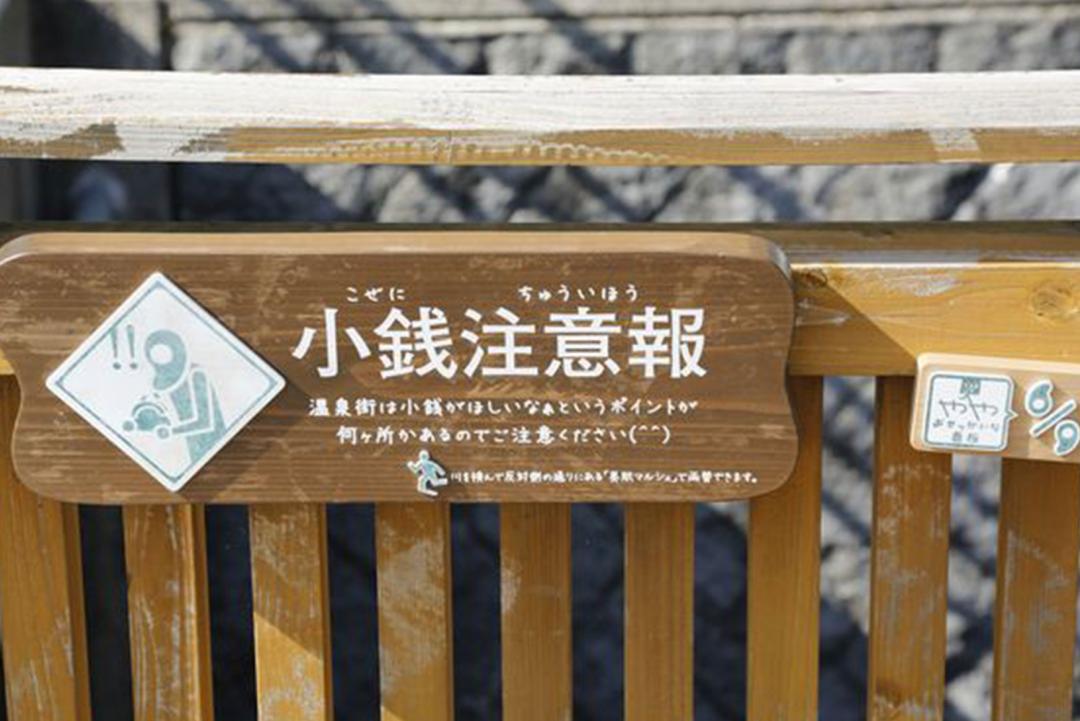 There are lots of unattended stalls selling things in the onsen district, so it’s easy to run out of hundred-yen coins. Alerts have been issued, so take care.

Please note that there are several places around the onsen district where you’ll need coins. 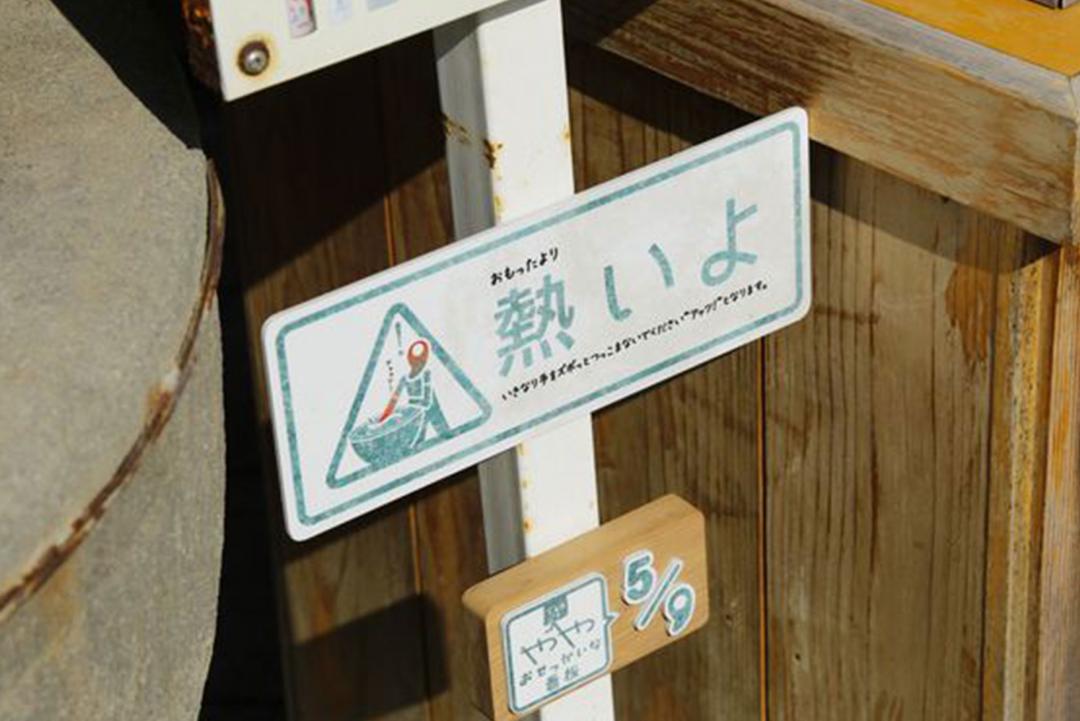 The hot spring at the Yuyakushi Square where you can take home hot spring water is straight from the source, so is a little on the hot side.

It’s hotter than you think. If you shove your hand in, you’ll find out just how much, so take care. 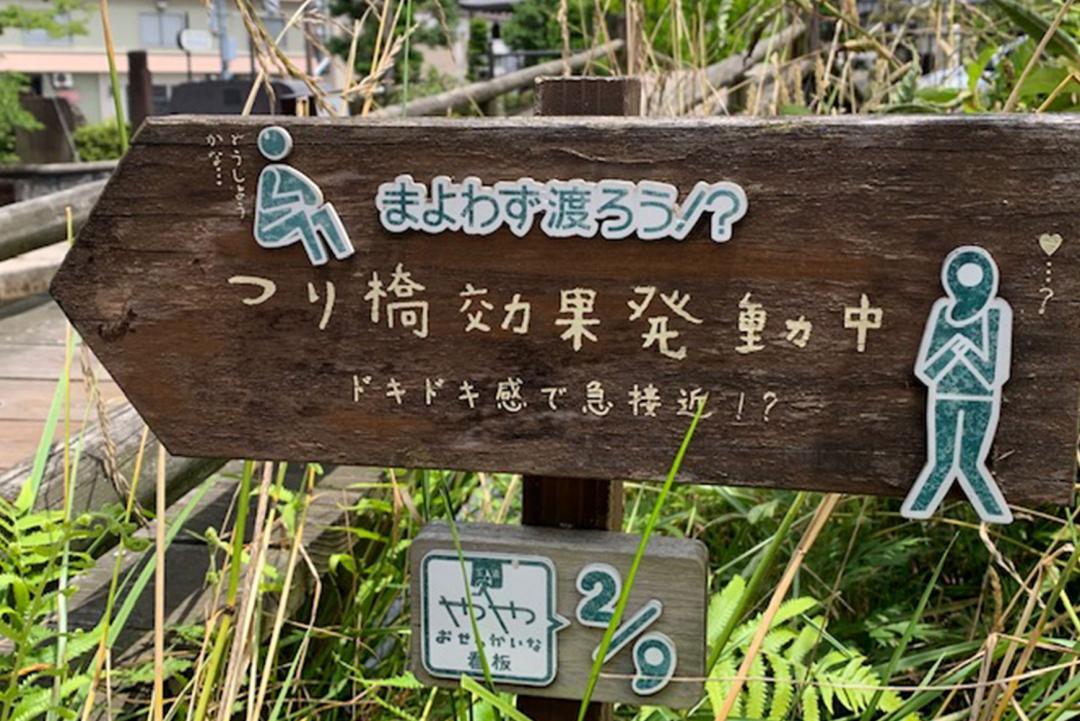 This is a slim wooden bridge with low handrails, so it’s quite nerve-wracking getting across. The bridge might have this sort of effect. 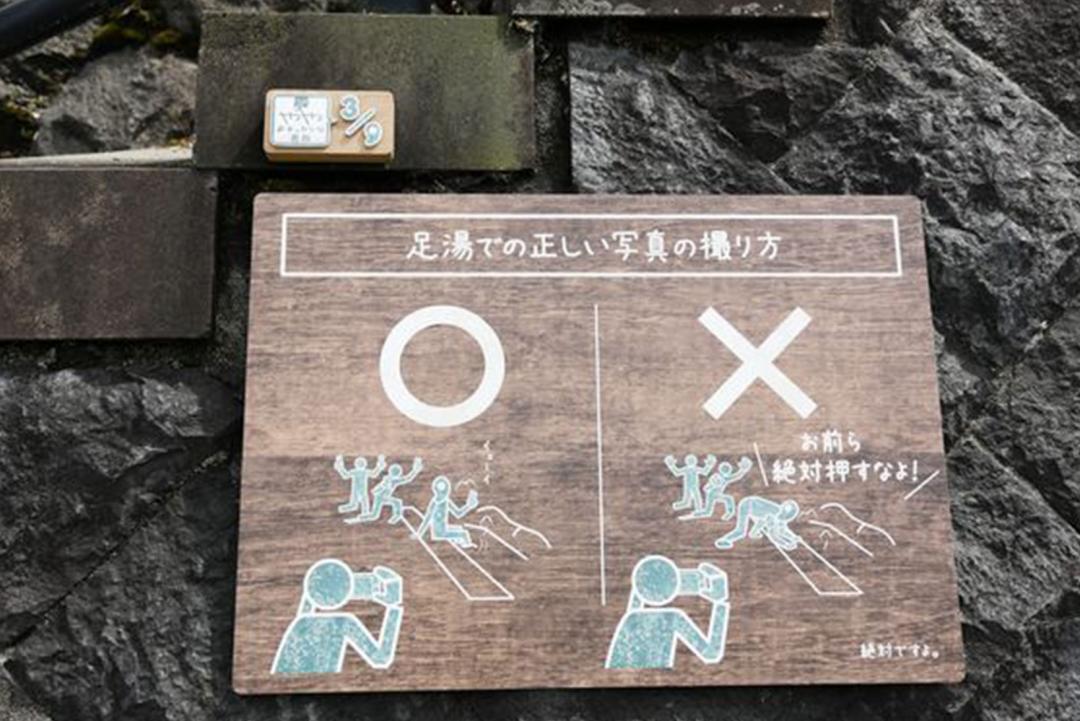 This sort of silly sign is found somewhere around the riverside footbaths. It’s a parody of a joke by one of Japan’s most famous comedians.

How to take photographs correctly at a footbath 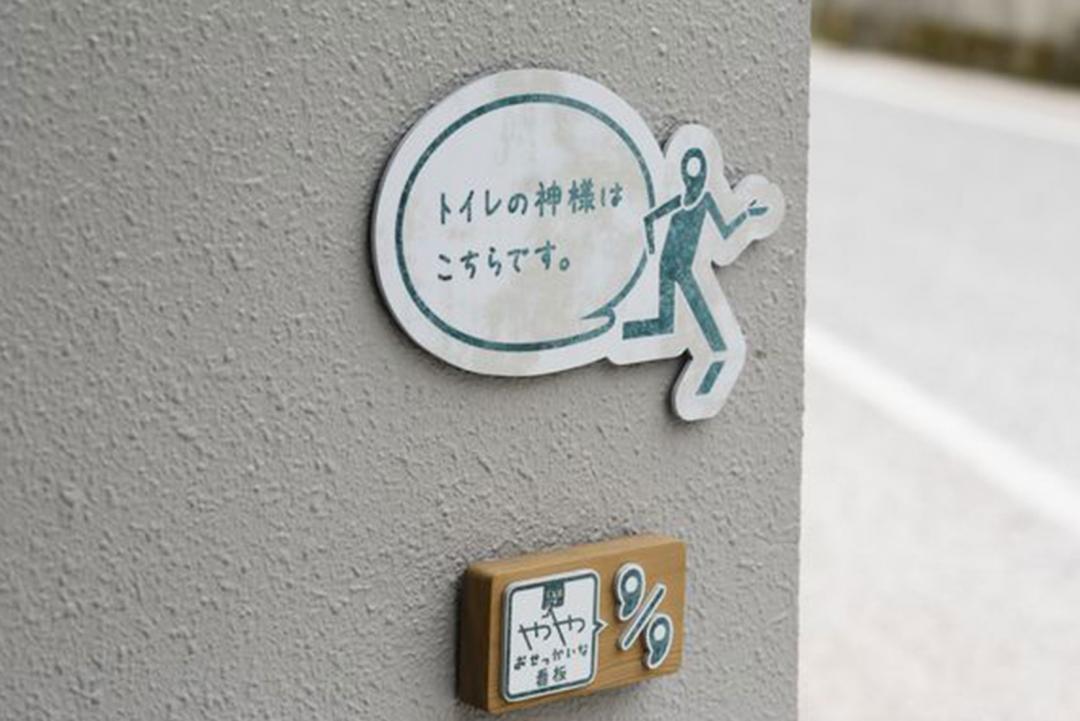 A few years ago, the song “God in the Toilet” was really popular in Japan.

This is really just a public toilet.

The Toilet God is over here. 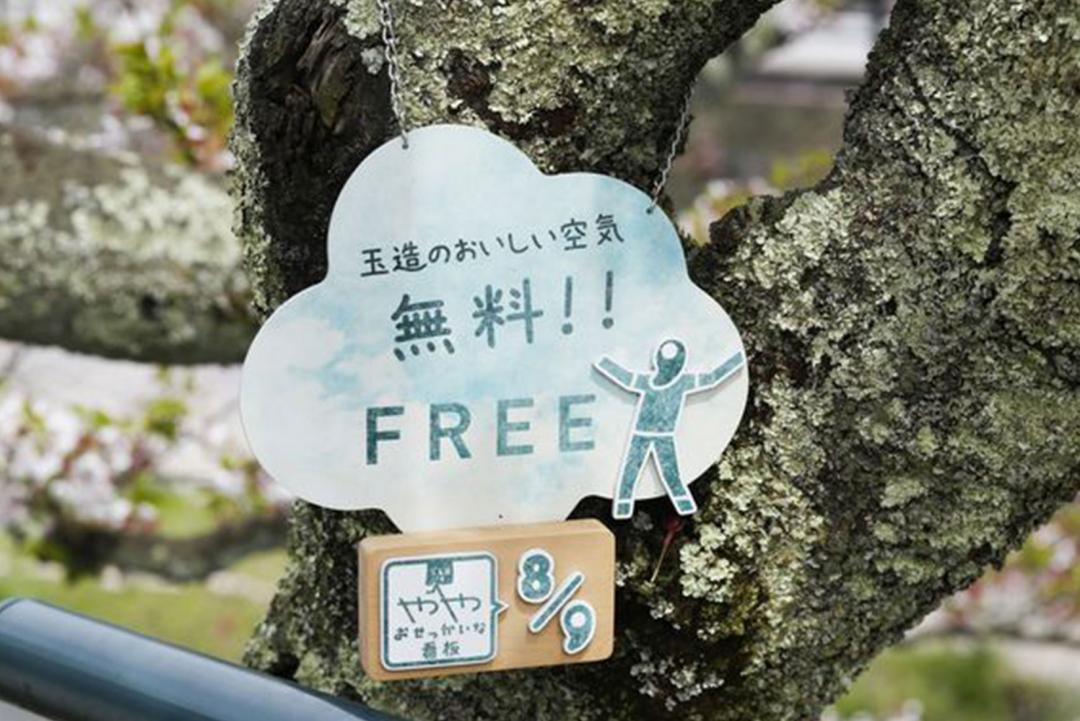 People coming here from the big city are taking deep breaths, saying “there’s so much nature here, so the air’s so delicious!” so we want you to relax a bit.

These talking signs will quietly tell people little secrets about the onsen district that you’ll want to share with others. There are a total of seven, so it’s fun to search for them as you amble around the onsen district. Some of them also might have familiar faces…? 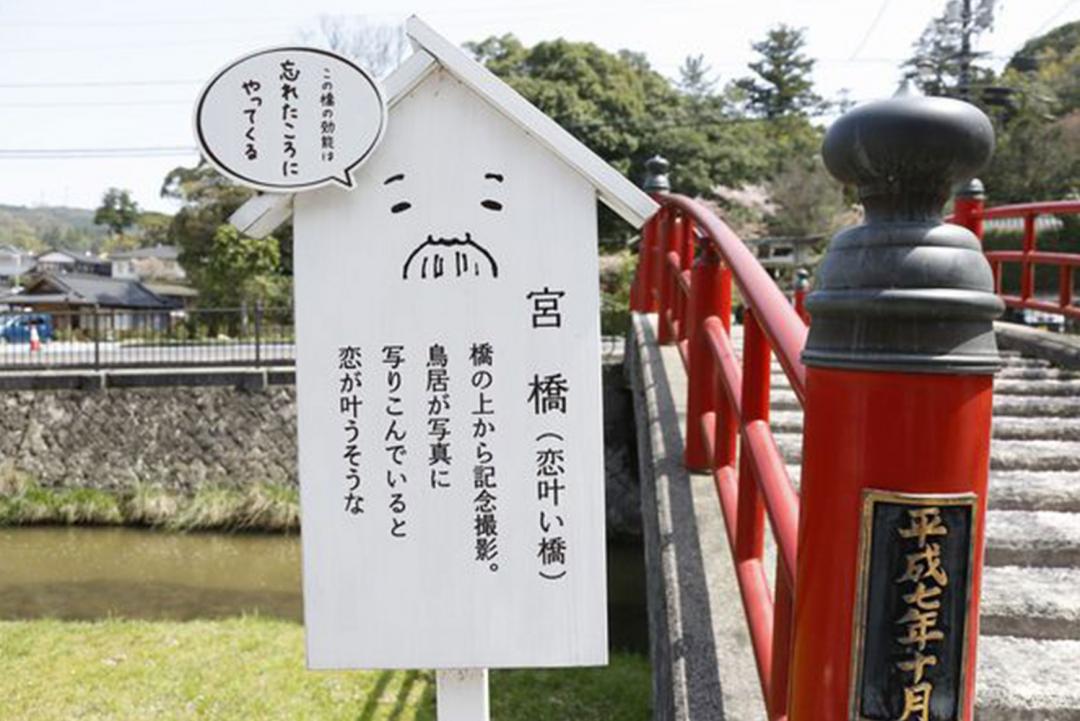 The Miyabashi Bridge in front of the Tamatsukuri-yu Shrine. Look for the red balustrades. There is an urban legend that if you can see the shrine’s torii gateway when you take a photo on this bridge, you will find love, so it’s a popular place for photos. 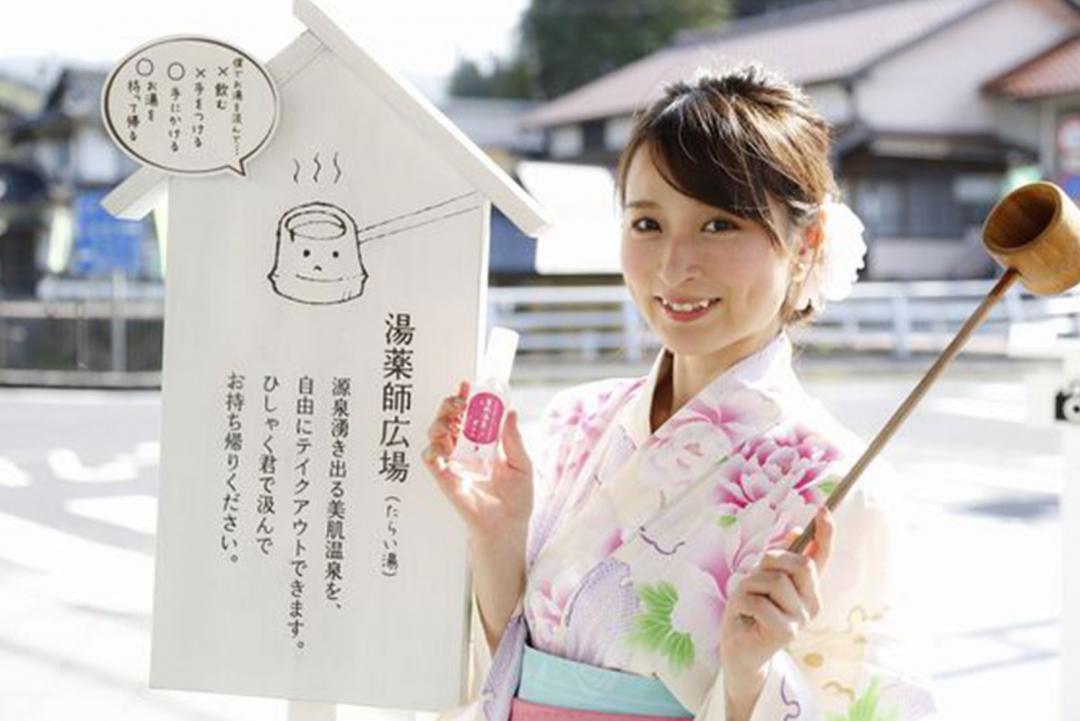 Talking sign at Yuyakushi Square A popular spot where you can collect and take back the source water of the hot spring. The way to do so is written here.

Soak your hands in the water ⇒ X

Scoop up the water in a dipper and rinse your hands ⇒✔

Take the water back home ⇒✔ 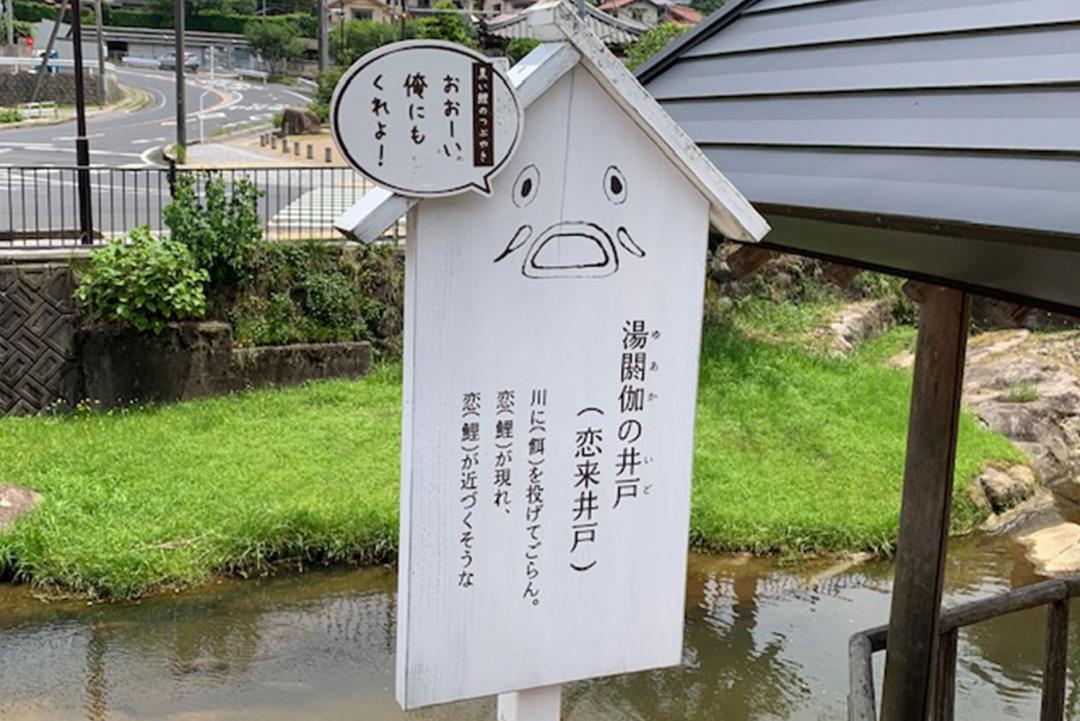 There are carps in the river, and if you toss food in the river (100 yen for carp food), they’ll come to you.

This is a joke that really only works in Japanese, as “love” and “carp” are both pronounced “koi.”

Never mind. Just toss some carp food in and see what happens. The white carps are the stars, so don't let the black carps miss out either. 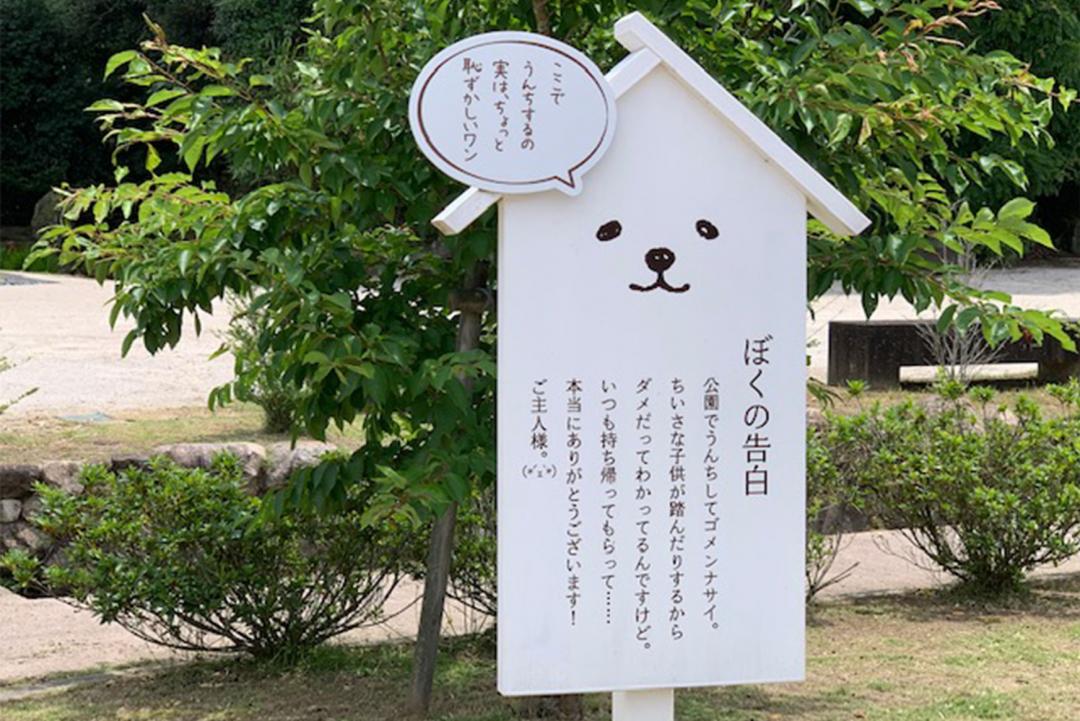 The park beside Tamatsukuri-yu Shrine had a problem. Local dog lovers would let their dogs poop all over the park, and leave it lying around.

So they erected a sign. But they didn’t want tourists to feel repulsed, so the sign was written from the dog’s perspective. And now no one leaves dog poop lying around anymore.

I’m sorry for pooping in the park. I know I shouldn’t, because little children play here, so thanks for always picking it up and disposing of it properly, Master! 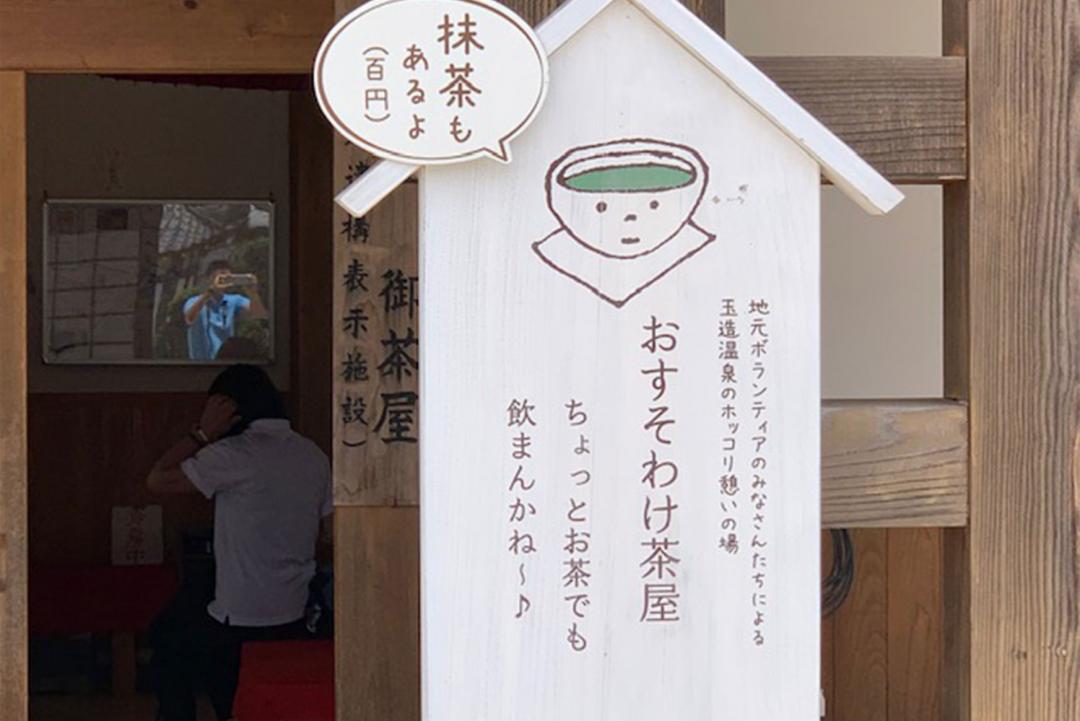 The sign at the Osusowake Chaya is also warmly and friendly.

A relaxing place to rest, run by volunteers. 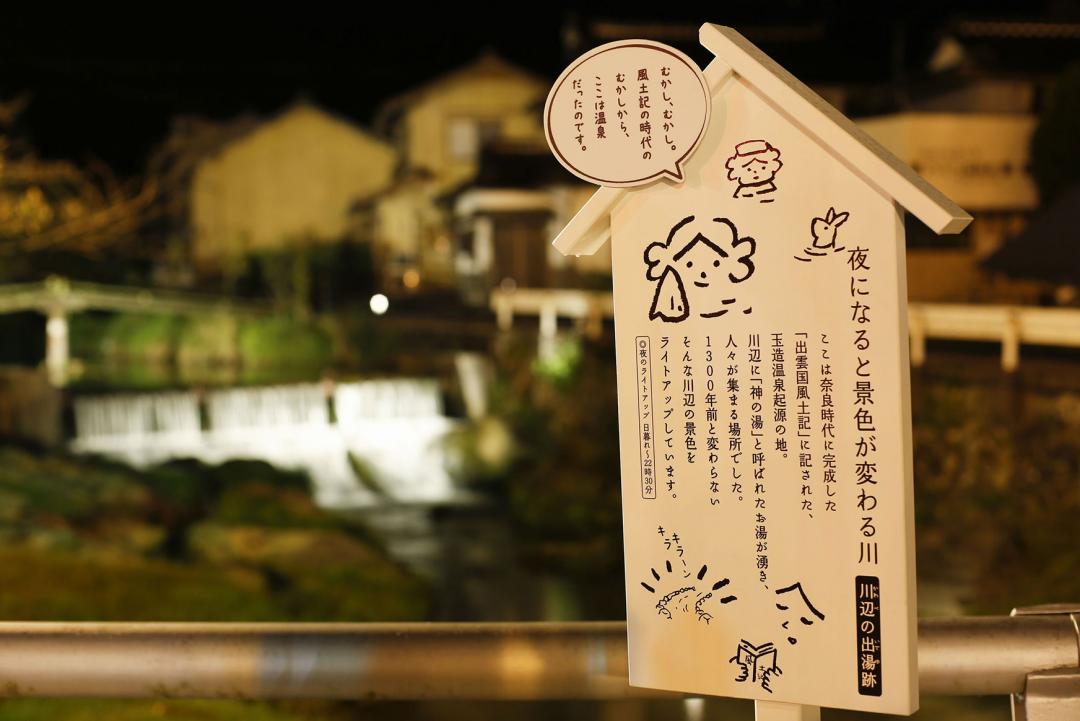 The hot spring by the river is lit up at night.

The river looks different at night

This is where Tamatsukuri Onsen first developed, as recorded in the Izumo-no-Kuni Fudoki some 1300 years ago. A spring, known as the spring of the gods, was gushing up, so people started coming here. The river scenery, unchanged from 13 centuries ago, is lit up at night (from sunset to 22:30). The green stone in the middle of Magatama Island in the river is actually agate, the original material used for magatama (curved beads). These days, it is considered a “power stone,” and many people believe that touching this stone in the river will bring you happiness. 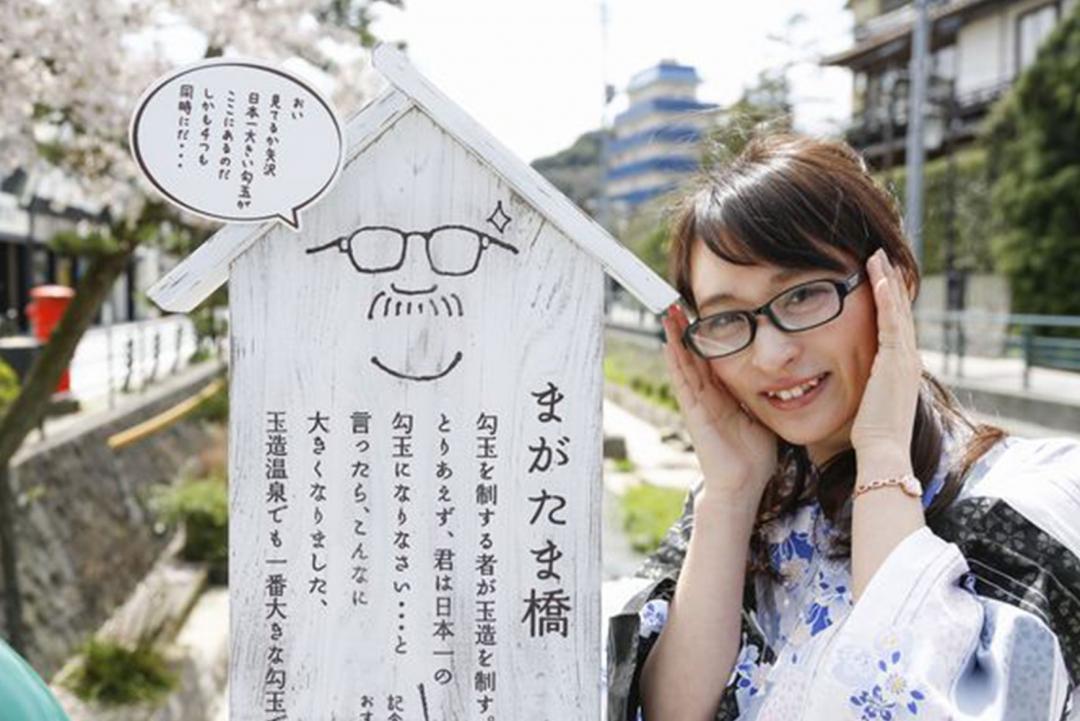 The Magatama Bridge sign looks like a character from famous basketball comic. People in the know will look at it and go “Huh? Anzai  …”

He who controls the magatama controls Tamatsukuri. "You must be the greatest magatama in all Japan.” That is how this one got so big. The river footbaths are directly fed by the source water, so the water can be very hot on certain days.

But isn’t it nice to have days when it’s too hot? This is a hot spring, after all. There are homes of deities here, and at sunset, lights shine from them.

It makes the place look as if the deities have returned their homes.

The crossing bridges are full of gods 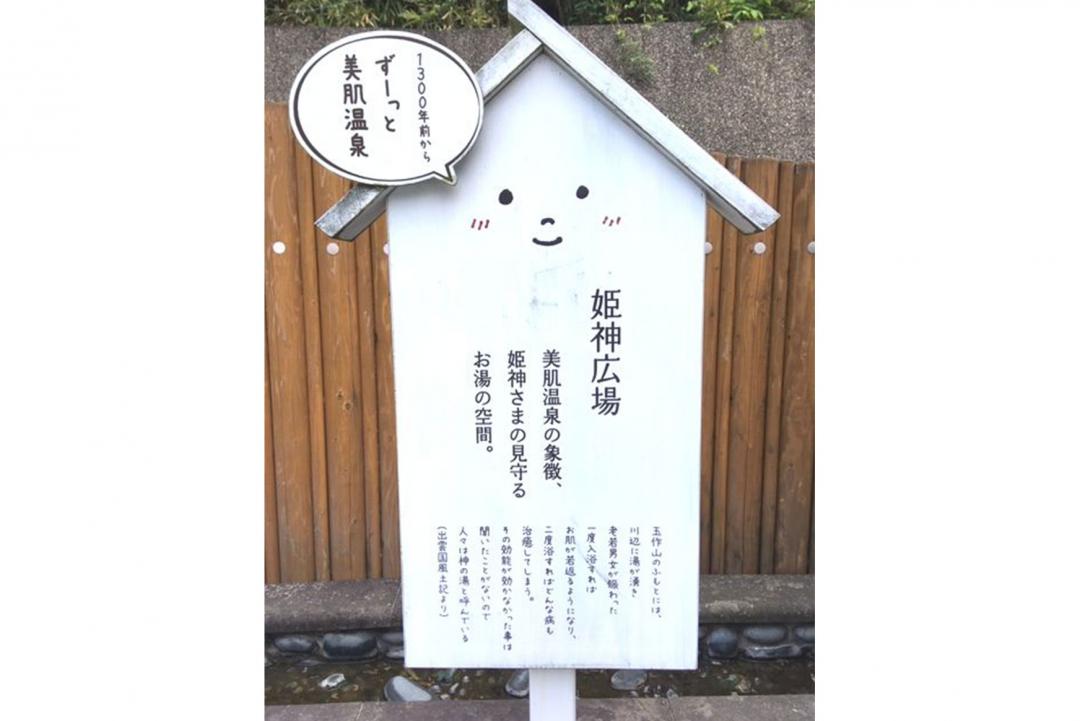 Around 1300 years ago, Tamatsukuri Onsen was said to be a divine spring, where if you bathed but once, it would make you younger and more beautiful, so it came to be called the Himegami (Princess Goddess) Water of Beautiful Skin.

It has remained a hot spring for beautiful skin for the subsequent 13 centuries.