Objets d’art from the ancient myths

Objets d’art from the ancient myths 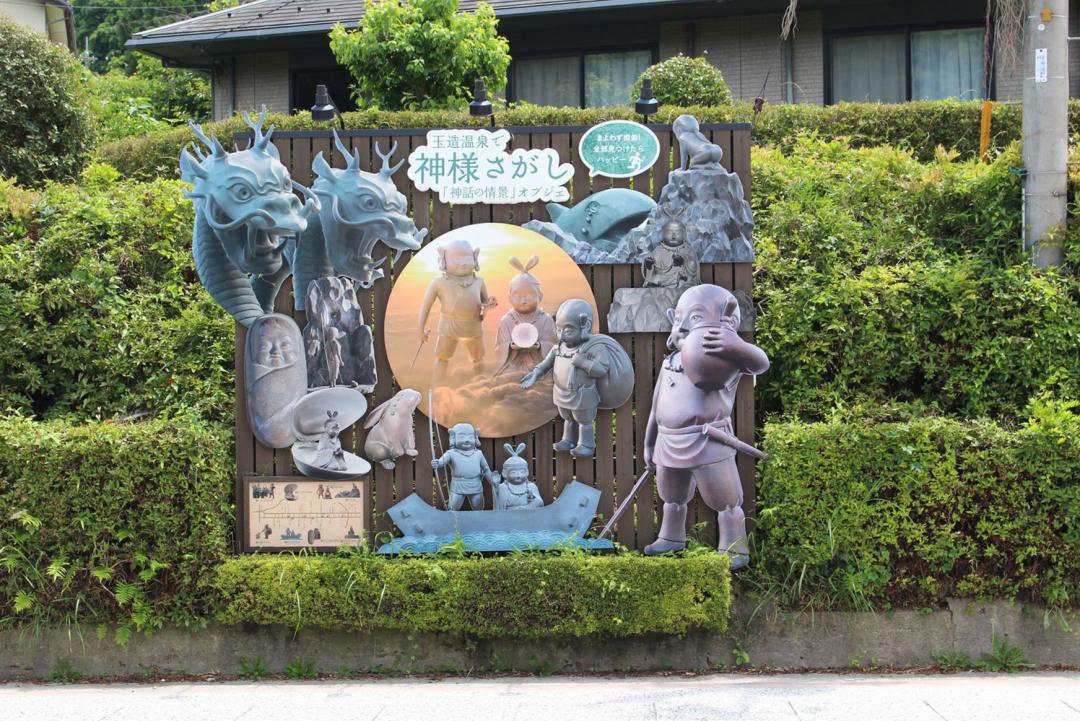 These objets d’art recreate lifelike famous scenes and gods from the ancient myths of Japan.

The “Legend of the White Hare of Inaba” that was saved by Okuninushi-no-Mikoto, the “Descent from Heaven and the Three Sacred Treasures” that tell how these items became the Imperial Treasures, and other myths and legends.

These were created by the sculptor Satoshi Yabuuchi, famous for his Sento-kun mascot of Nara.

These artworks are scattered around the Tamayu River which flows through the onsen district, so you can enjoy strolling around town seeing each one.

There are eight in total. Can you find them all? 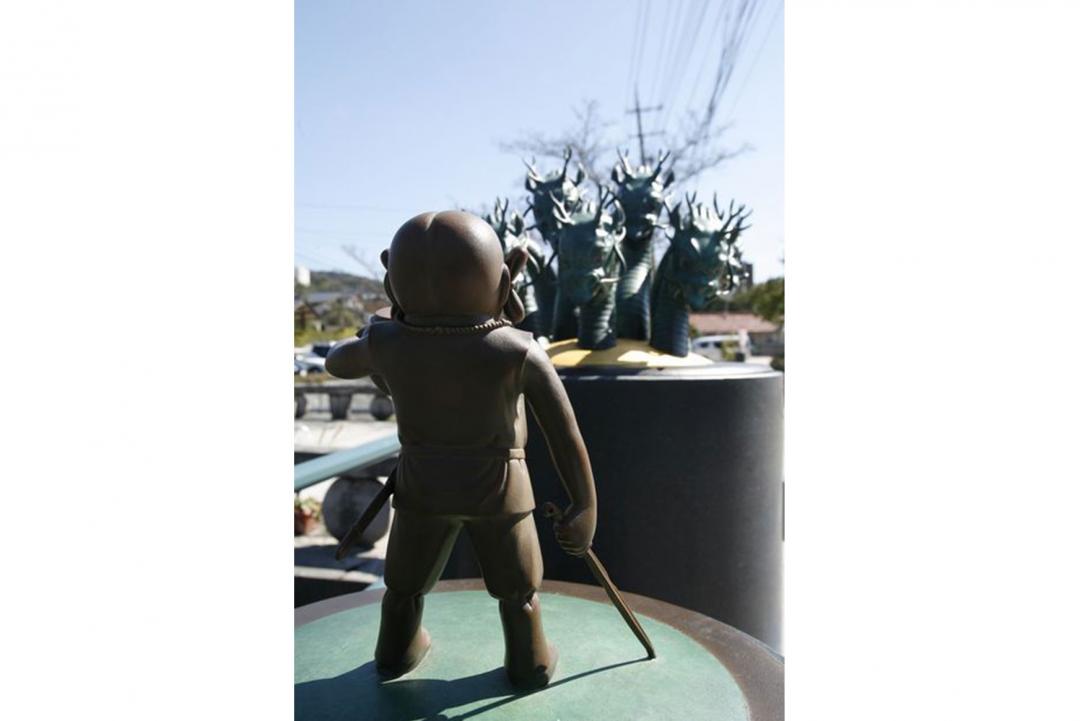 1. The Legend of How the Great Serpent Yamata-no-Orochi was Vanquished (Princess Kushinada)

The god Susano’o-no-Mikoto, expelled from the Heavenly Plains (Takamagahara), arrives in a place called Torikami, upriver along the Hinokawa River in the province of Izumo. Heading upriver, he encounters an old man and an old woman, and their beautiful daughter Princess Kushinada, all weeping. Susano’o asks them why they weep, and they tell him that every year, the great eight-forked serpent (Yamata-no-Orochi) appears, and has already taken seven of their daughters. Now it is time for Princess Kushinada to be taken. Susano’o feels pity for these people, and tells them that, if they give him the princess for his wife, he will vanquish Yamata-no-Orochi. On hearing that Yamata-no-Orochi has eight heads and eight tails, he pours sake into eight vats, and when the serpent arrives and drinks the sake, he is able to vanquish the drunken beast. Slaying Yamata-no-Orochi reveals a wonderful sword in one of its tails, which Susano’o takes and offers up to Amaterasu Omikami, the Sun Goddess.

When Susano’o arrived at Suga, in Izumo Province, with Princess Kushinada, he says how refreshed he feels, and builds a new palace here, where he lives with Kushinada. When the palace was built, many clouds filled the air, giving rise to the famous poem:

This is traditionally considered the oldest waka, or Japanese poem. 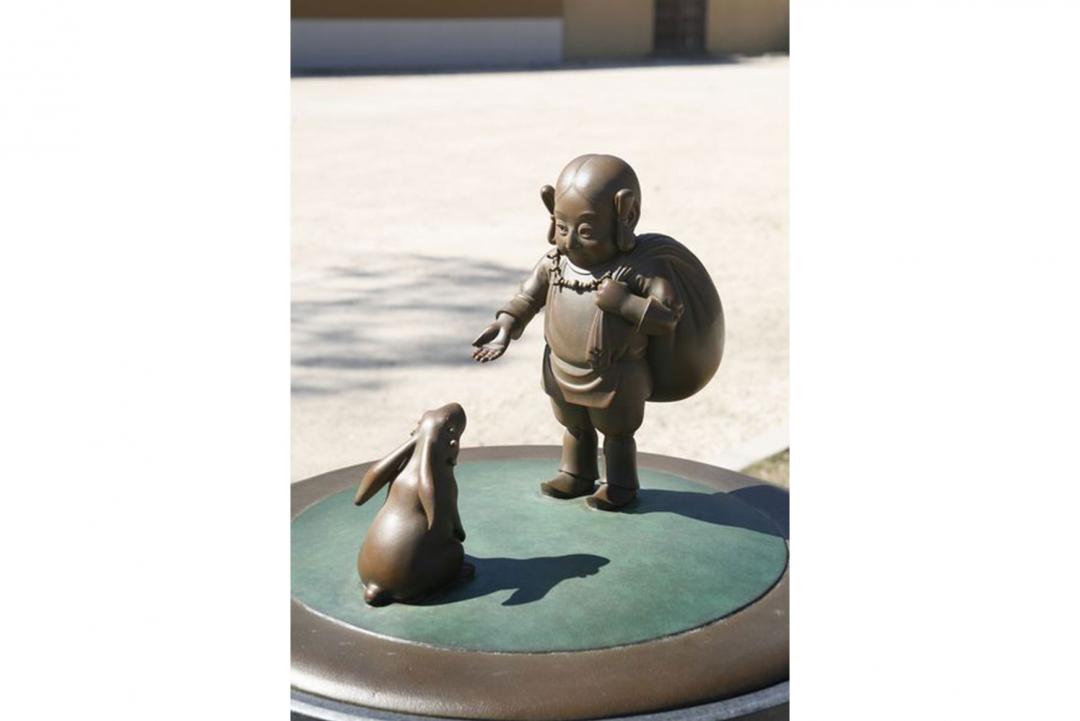 2. The Legend of the White Hare of Inaba

The brother gods of Okuninushi-no-Mikoto, the descendants of Susano’o, were traveling to Inaba Province to seek the hand in marriage of the Princess Yakami, famed for her beauty.

Okuninushi was made to carry luggage on his back, and left with them. When they arrived at Cape Keta, they encountered a hare that had deceived the sharks. As the hare rode across the Cape on the sharks’ backs, he had his fur stripped off by the sharks. The brothers told the hare that it should bathe in the salt water then dry off in the wind, but when the hare did so, its skin was blown dry by the wind and cracked, increasing its agony. When Okuninushi finally arrived, he told the hare to bathe itself in pure water and wrap itself in cattail pollen, lying on it. The hare did so, and regained its original pure white form. Then the hare told Okuninushi, “Princess Yakami shall marry you.” As the hare foretold, Princess Yakami did indeed marry Okuninushi . 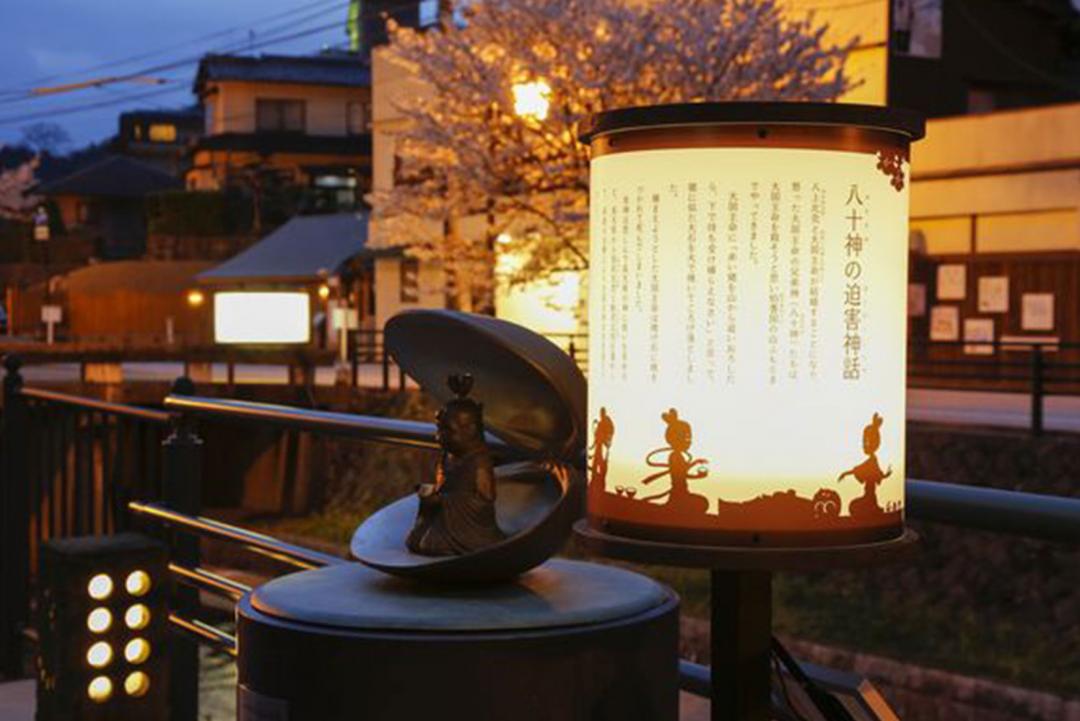 3. The Legend of the Persecution of the Many Gods (Princess Umugi)

When Princess Yakami and Okuninushi were wed, his brother gods were furious, and attempted to kill him, coming as far as the foothills in the province of Hoki.

They told Okuninushi, “When we flush out a red boar from the mountain, you must wait at the bottom and catch it.” However, they actually rolled down a red-hot stone shaped like a boar.

Okuninushi attempted to catch it, and suffered terrible burns, dying of his injuries.

His grieving mother sought the salvation of the gods in the Heaven Plains (Takamagahara), who sent down Princess Kisakai and Princess Umugi, who were able to treat Okuninushi and bring him back to life. 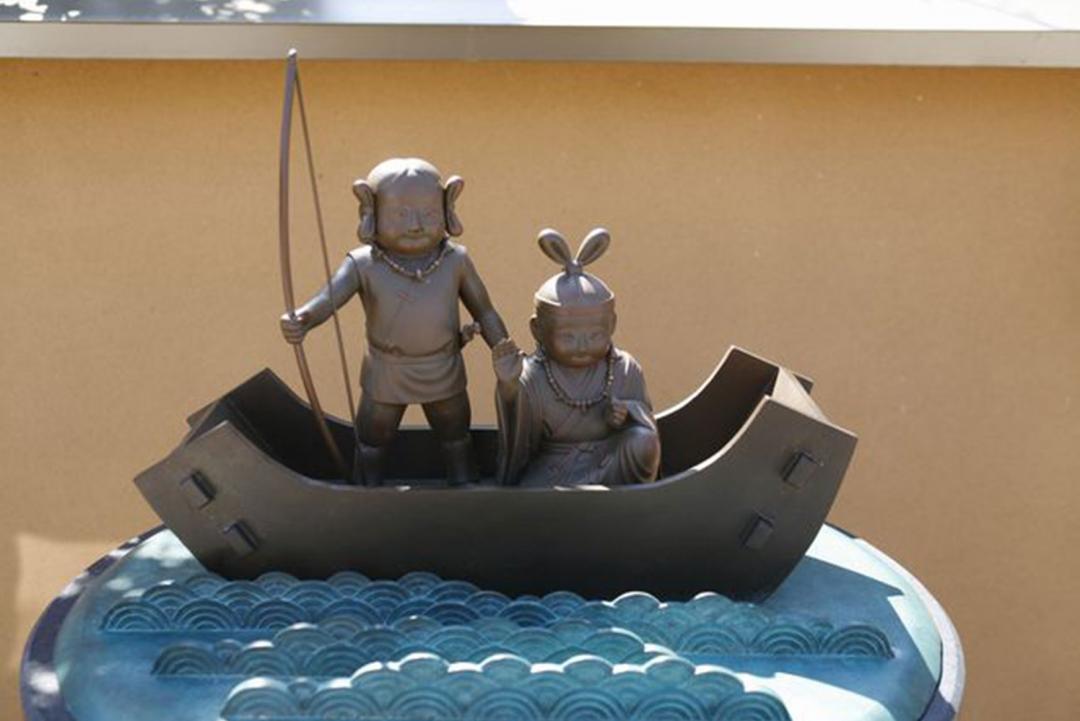 4. The Legend of the Visit to the Netherworld (Princess Suseri)

When Okuninushi married Princess Yakami, his furious brother gods wounded him severely attempting to kill him.

Okuninushi, after talking with his divine mother, decided to head to Ne-no-Kuni, the Land of Roots, the netherworld where Susano’o-no-Mikoto dwelt.

When he arrived in Susano’o’s realm, he encountered Susano’o’s daughter, Princess Suseri. The two exchanged looks, and decided to marry.

When Okuninushi reported this to Susano’o, the older god set him a trial of sleeping in a room with snakes and centipedes.

Okuninushi, with the help of Princess Suseri, was able to overcome this trial, and, grabbing Susano’o’s treasures, his sword, his bow and arrows, and his koto harp, and fled the Land of Roots with Princess Suseri.

They had got as far as Yomotsu Hirasaka, the entrance to the netherworld, when Susano’o caught up with them, and told them, “You shall take Princess Suseri as your wife, build a palace at the foot of the Uka Mountain, and rule over the land of Ashihara-no-Nakatsukuni,” or the land of Japan.

Okuninushi used the weapons he had stolen to fight off his brothers, took Princess Suseri as his wife, and began carving out his kingdom.

*Foot of the Uka Mountain: Mt. Misaki northeast of the Izumo Taisha Shrine

Yomotsu Hirasaka: The boundary between the worlds of the dead and the living 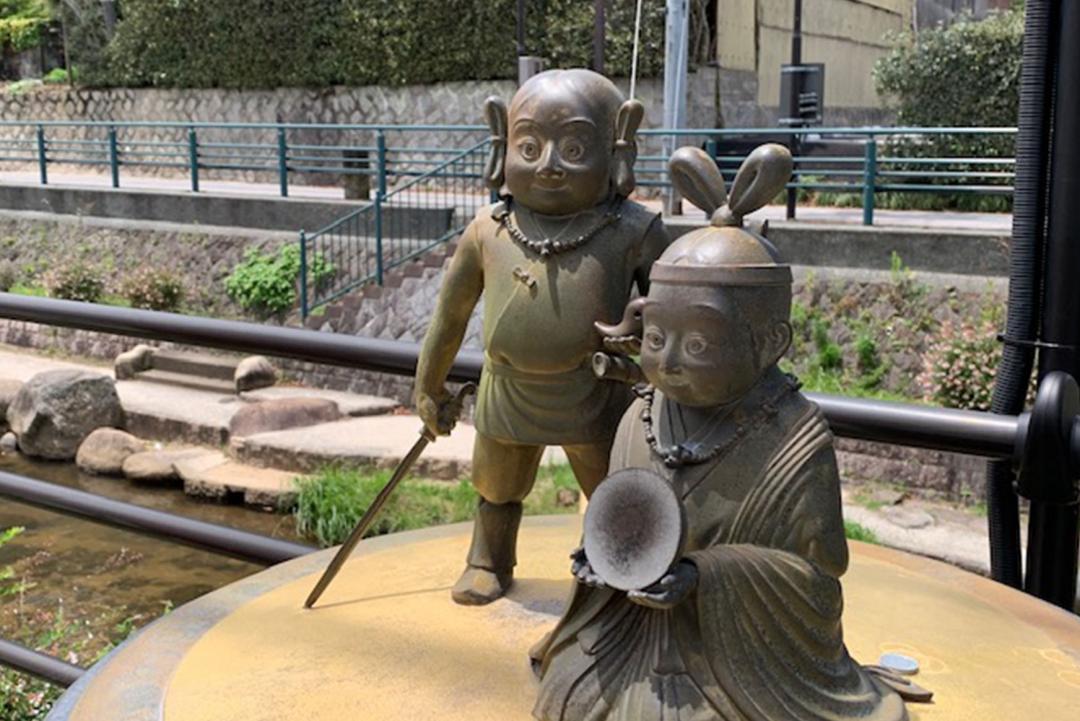 5. The Descent from Heaven and the Three Sacred Treasures

Of these, the Yasakani-no-Magatama jewel was created by Tama-no-Oya-no-Mikoto, who accompanied Ninigi when he came down to earth. Tama-no-Oya is the same deity as Kushiakarutama-no-Mikoto, enshrined at the Tamatsukuri-yu Shrine.

6. The Legend of the Birth of Sada-no-Okami (Princess Kisaka)

When the god Sada-no-Okami was born, his mother, the divine Princess Kisaka, lost her precious bow and arrows, and, after Sada was born safely, she prayed that they would reappear.

And then, a bow and arrows made of horn floated down the stream, so she cried, “These are not my bow and arrows!” and flung them away. A little while later, a bow and arrows of gold floated down, so she took them up, and, saying “What a dark cave this is!” she loosed off a golden arrow, which pierced the cave and let light flood the interior. This is why that land became known as Kaka.

*Kaka: Kaga Cave in Shimane-cho, Matsue, is known as Kaka no Kukedo 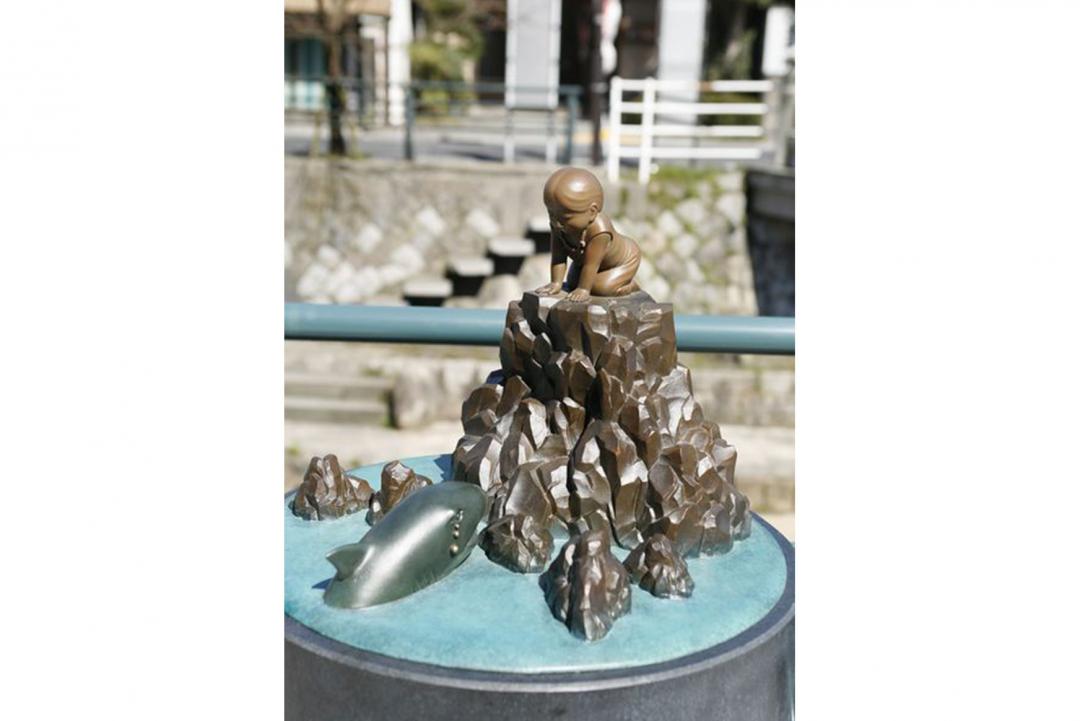 7. The Legend of Love Mountain (Tamahime-no-Mikoto)

A shark that fell in love with the beautiful Tamahime-no-Mikoto headed up the river to meet her. But Tamahime blocked the river with many boulders.

The shark was unable to progress further, and, blocked by the boulders, his love only increased, and eventually, his tongue trembling, he retreated.

The love of the shark has led to this place being called Love Mountain, and the shark transformed into a demon and became the place called Oni-no-Shitaburui, “Trembling Tongue of the Demon.”

Okuninushi-no-Mikoto set out to woo the Princess Nunakawa of the land of Koshi. Arriving at the princess’s home, he stayed out by the door all night, singing.

“I have come to the far-off land of Koshi where the beautiful princess lives. Let the birds who announce the morning stay silent.”

Princess Nunakawa sang in response from inside:

“Do not kill the birds. I shall come out to see you tomorrow night. Do not pine too much with love for me.”

And thus the two were wed.

The Izumo-no-Kuni Fudoki ancient report on the province relates how the goddess Mihosusume-no-Mikoto was born from their union, and gave her name to the place-name Miho.